*Fun fact: Deschutes means “falls” in French. Like Fancy Nancy says, everything is fancier in French!

B says, “I’m the guard of my birthday and we’re not doing school or taking showers and daddy’s not working on my birthday!”

We had originally planned to visit Crater Lake National Park but most of it was closed due to snow. Next time Crater Lake, next time…

Plan B was to go to Lava River Cave but the park ranger wouldn’t let us in. We had been to Bear Gulch Cave at Pinnacles National Park recently and we were wearing the same shoes we had worn there. We all only have one pair of lace-up, closed-toed shoes. Apparently there is a fungus causing a deadly disease in bat populations and these rangers aren’t taking any chances. Nothing that’s been in any other cave, anywhere, is going in this one, period. 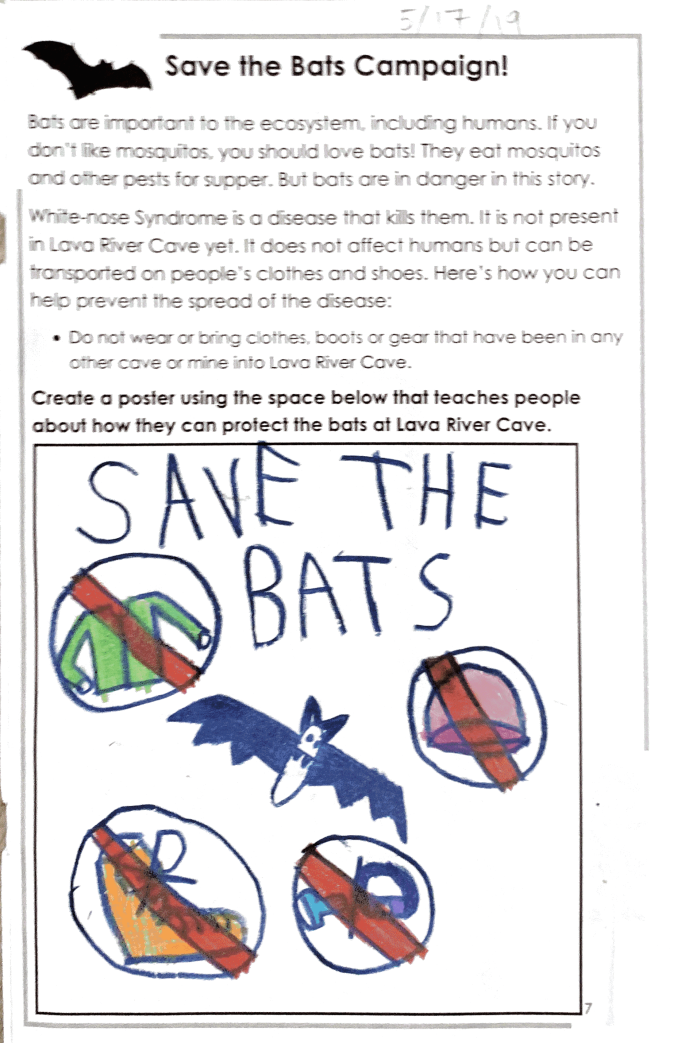 Never mind, we will figure out another activity. Plan C, we drove to the top of Lava Butte for a great view! It was windy and chilly up there. We walked .25 mile around the rim of the volcano. 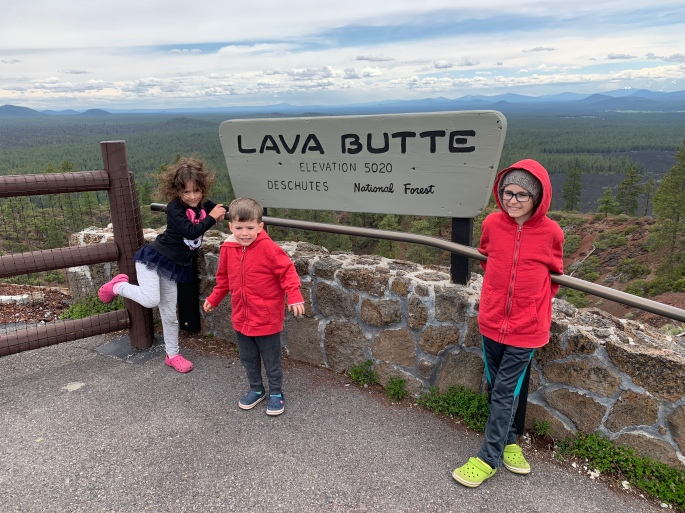 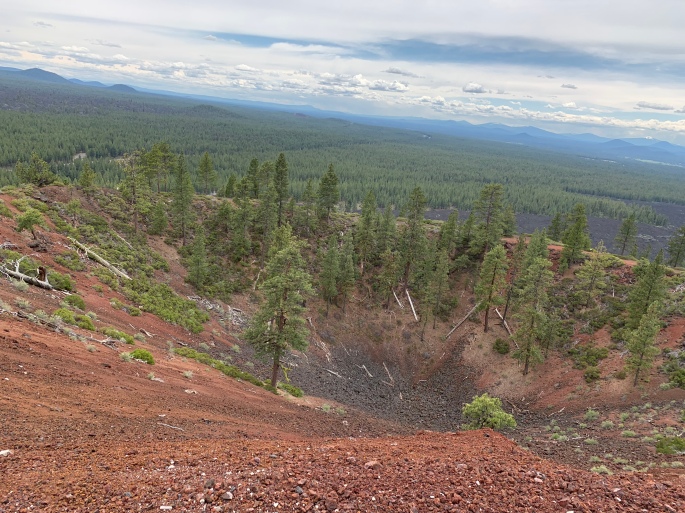 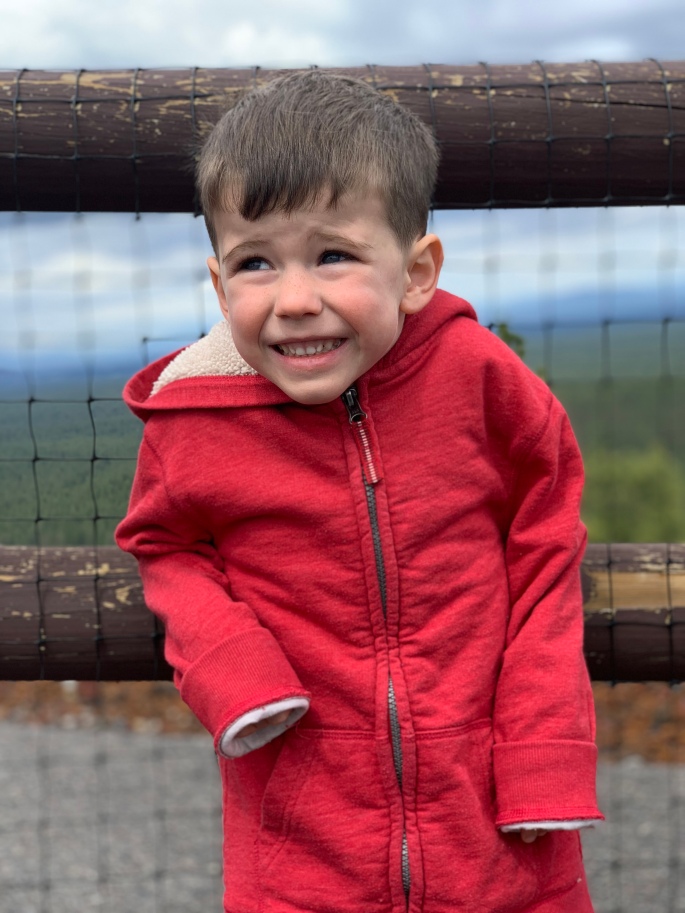 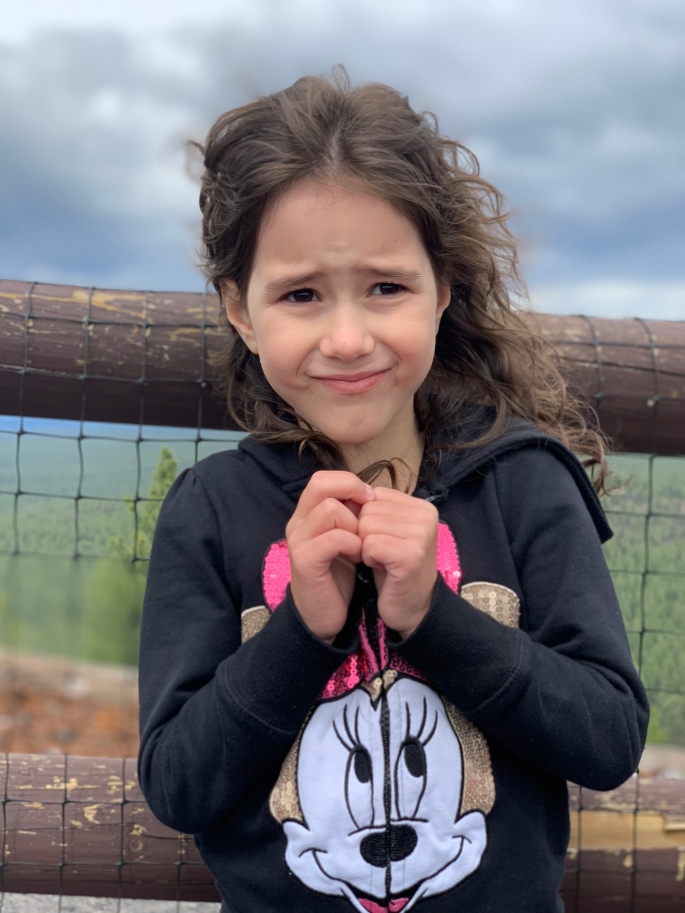 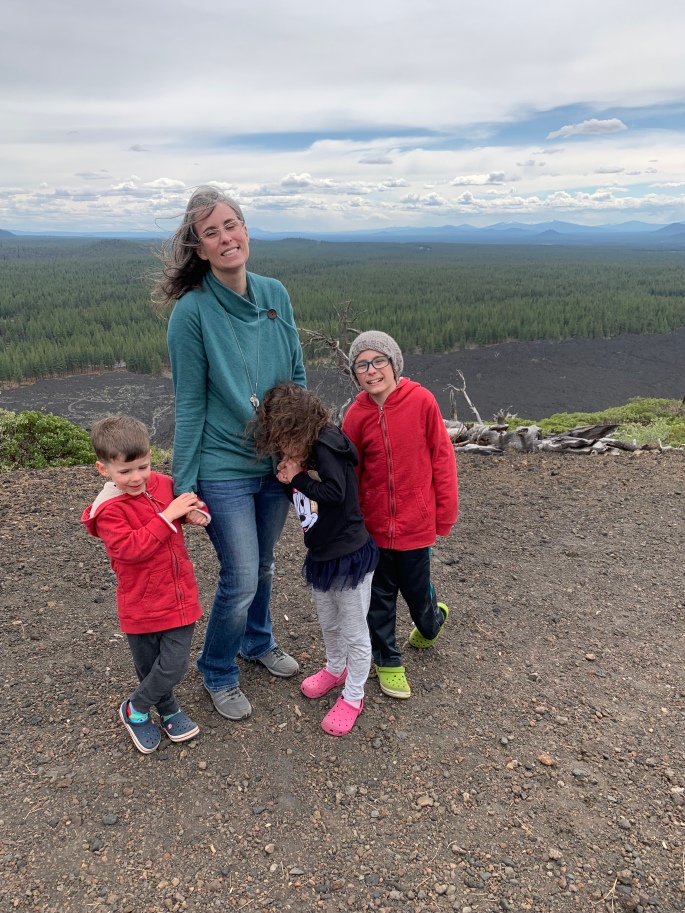 Then we decided to do a quick “1/2” mile hike to Benham “Falls”. Except it was 2.5 miles round trip and Benham “Falls” was white water rapids… hmmm… things that make ya wanna say, hmmm… I think I saw 3 signs along the trail and each one said 1/2 mile to falls. Come on people, I just started to kind-of like hiking. This is not helping!

Just so ya know, the hike is 1.25 miles from the trailhead at the parking lot, not 1/2 mile like the sign says. The rapids are about 1 mile from the 2nd “1/2 mile sign” after the bridge. The rapids were powerful and impressive but not what I was expecting. 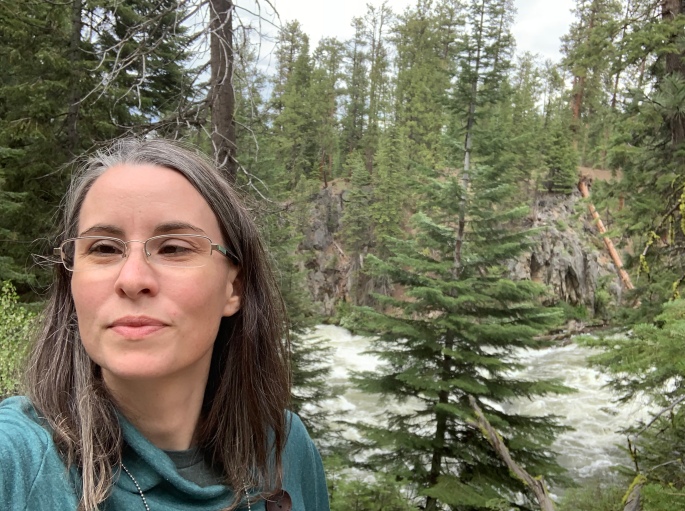 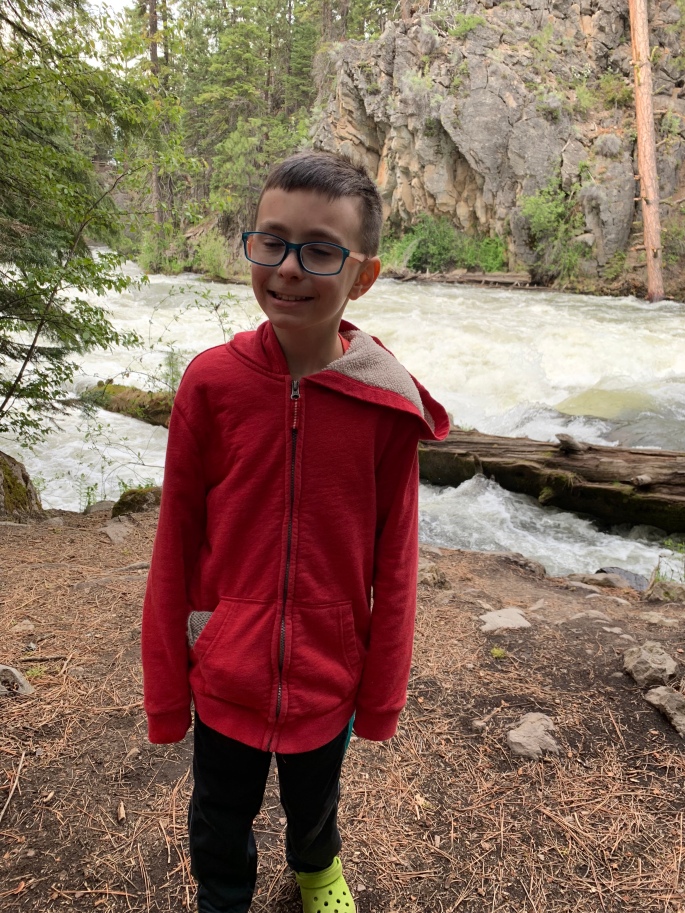 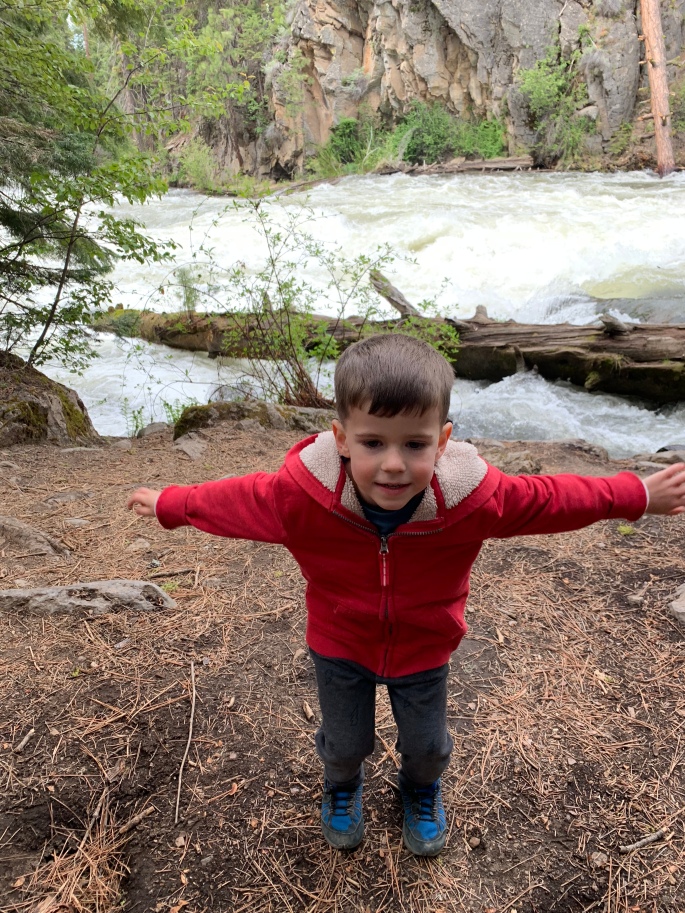 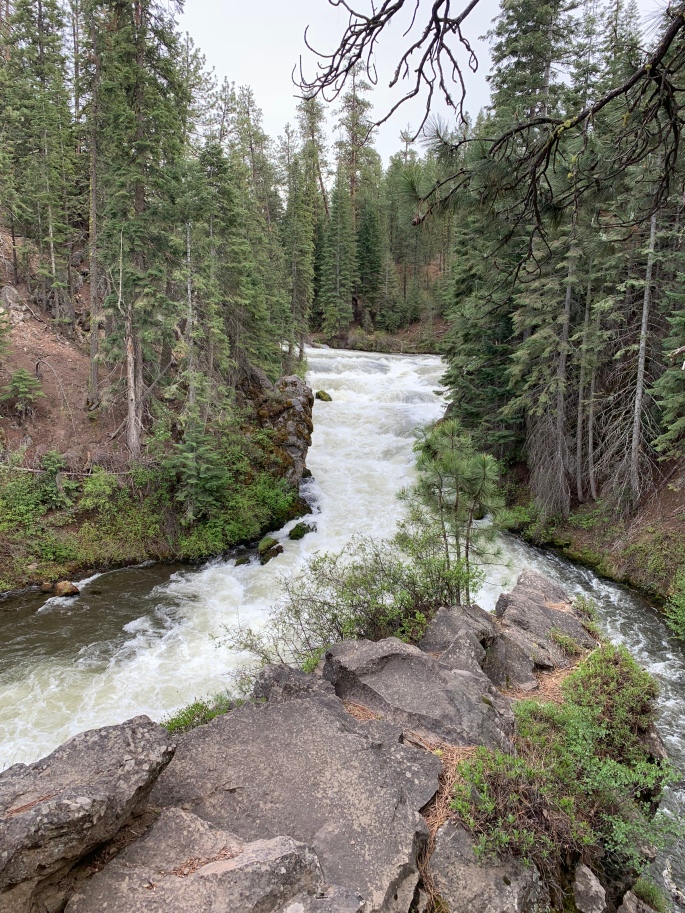 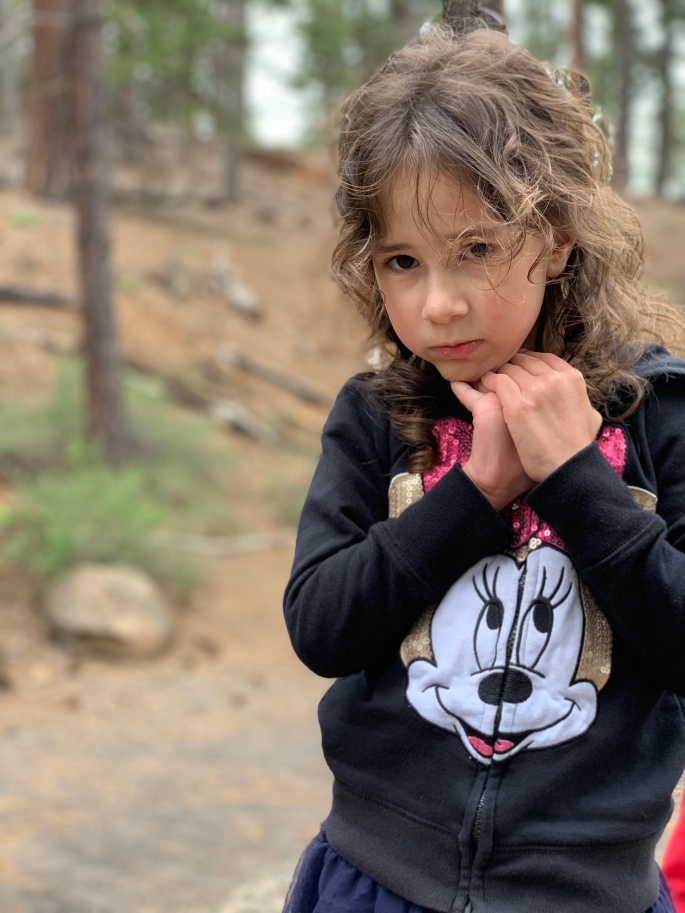 We ended the day with cookies, vegan ice cream, popcorn and movie night with Wall-E. 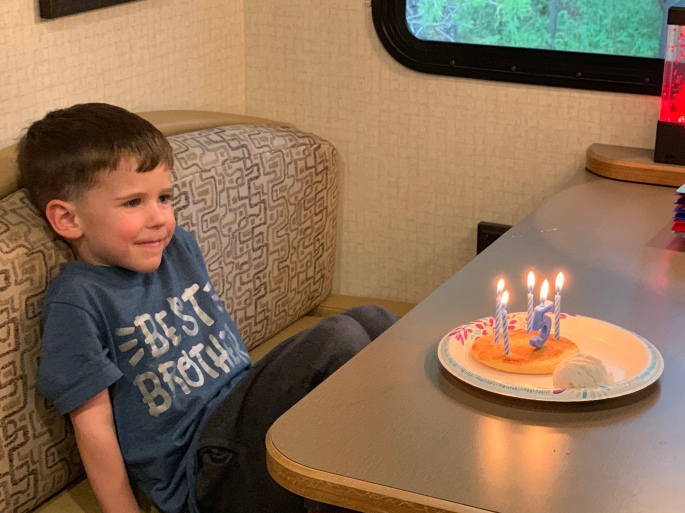 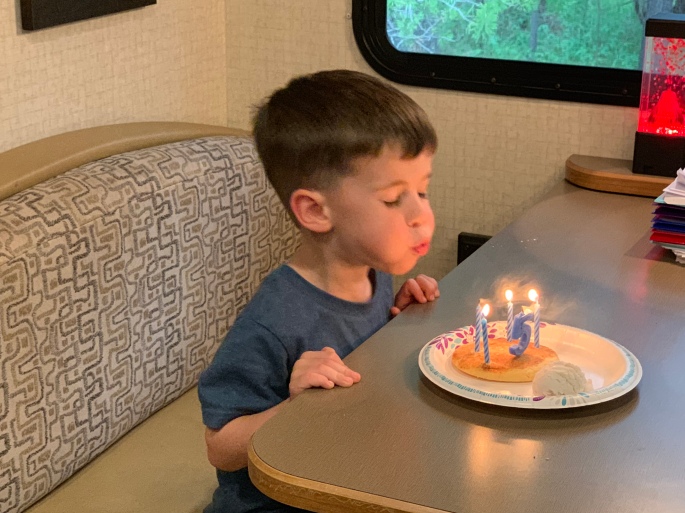 We debated buying new shoes for everyone, so we could go to the cave. In the end, we just couldn’t justify the time, money, energy, and space expenditures. Next time Lava River Cave, next time…

On our 2nd visit to Newberry National Volcanic Monument, we did a fun experiment to find out what type of rock floats and why. Science class ✅ 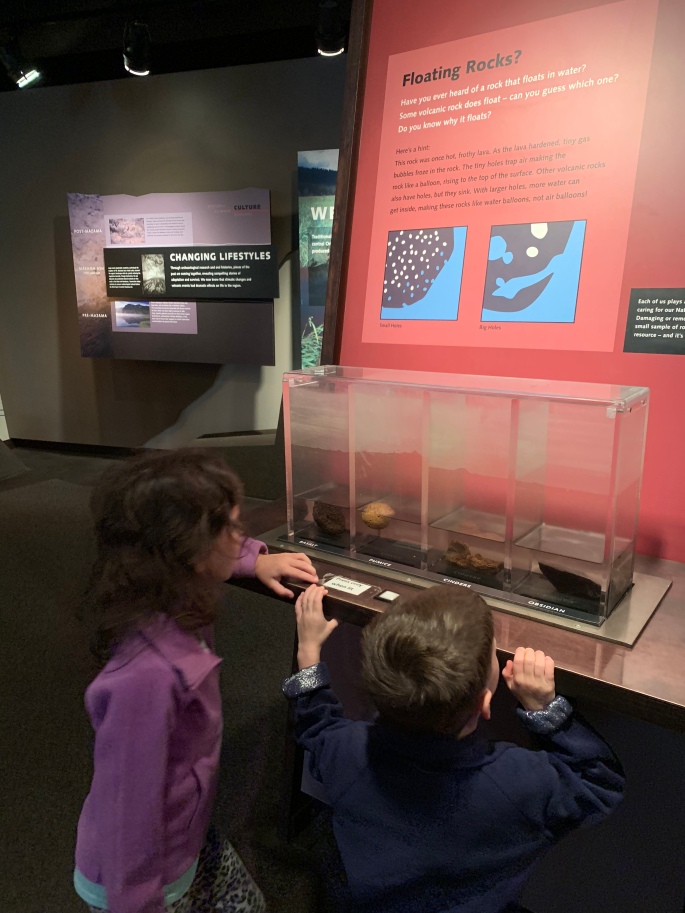 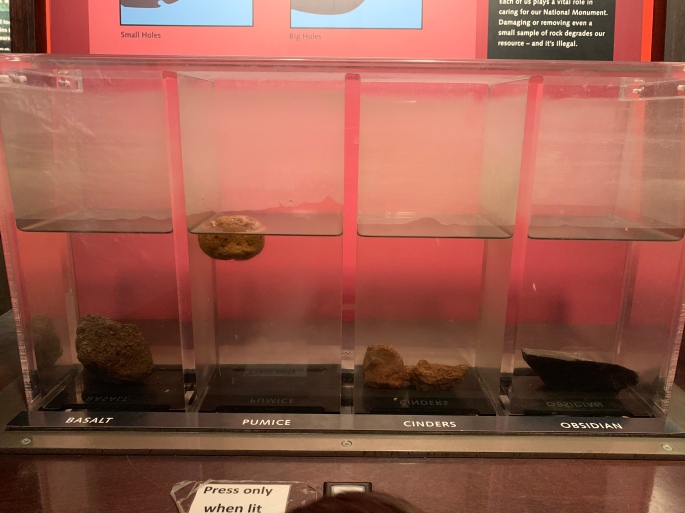 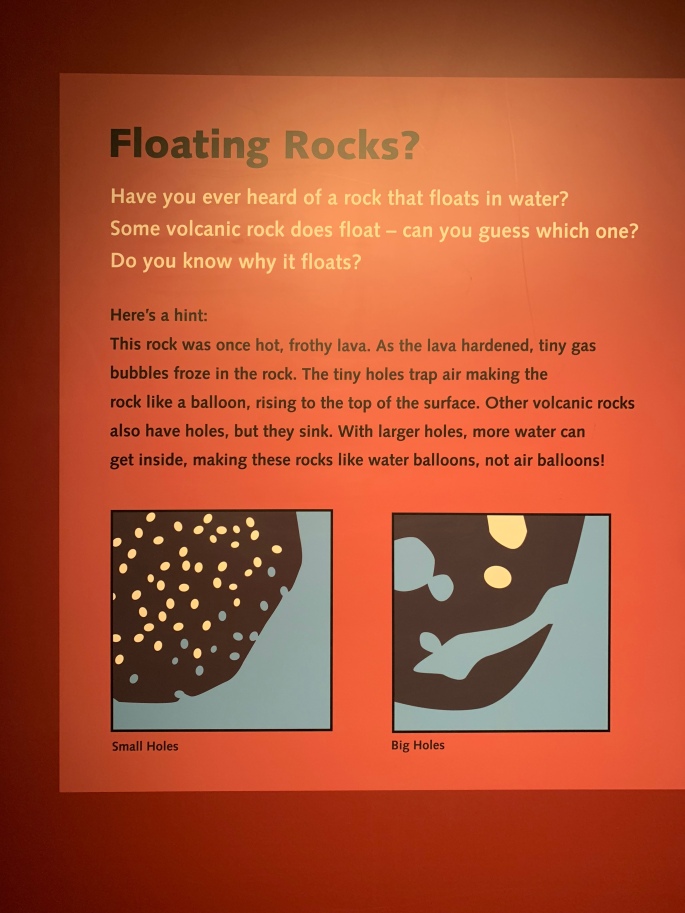 We listened to Park Ranger John talk about the park, examined different types of volcanic rock, and then went with him on a 1 mile loop “Trail of the Molten Land” hike. This was the first time we participated in park ranger led program and we really enjoyed it. We tend to get distracted and don’t read all the informative signs, so we don’t learn as much as we could on our hikes. We ❤️ park rangers! They can just tell you everything that you want to know and you don’t have to stop and read anything! We also met one park ranger who lives full-time in an RV and another park ranger who had taken his family on a one-year-long RV tour of the US. It was lots of fun talking to these folks! 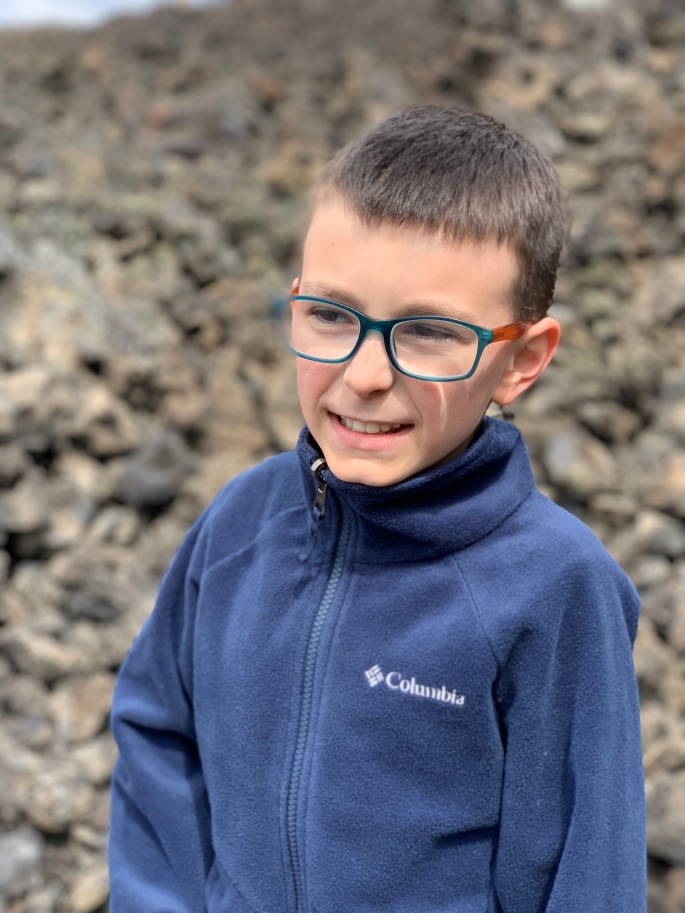 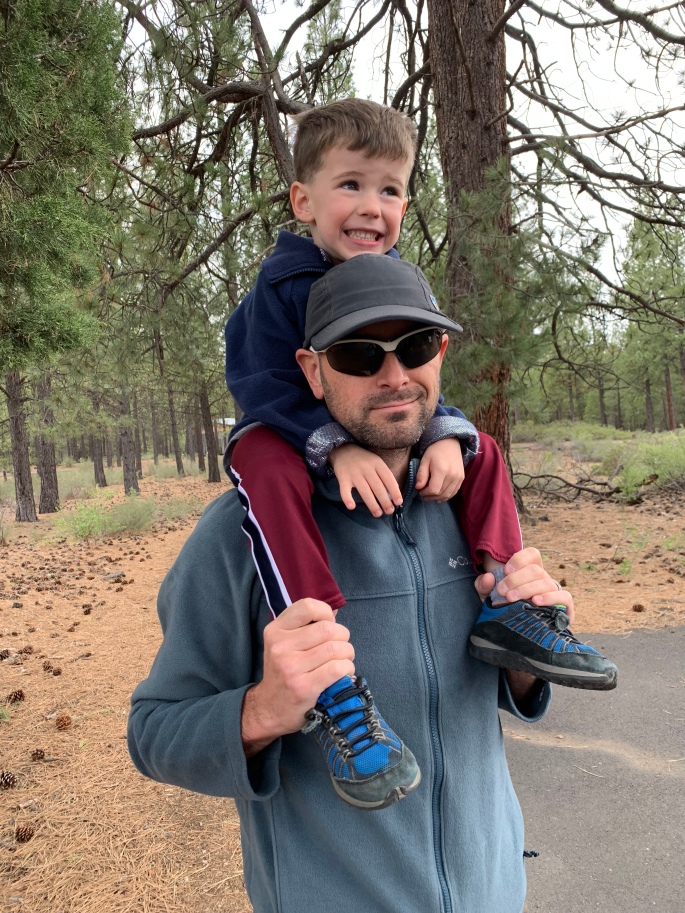 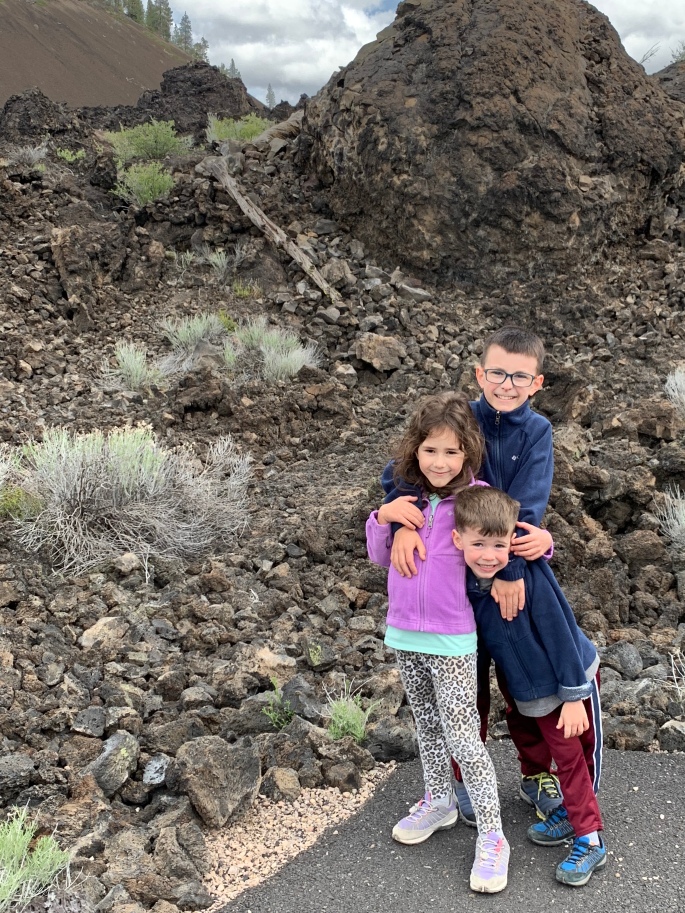 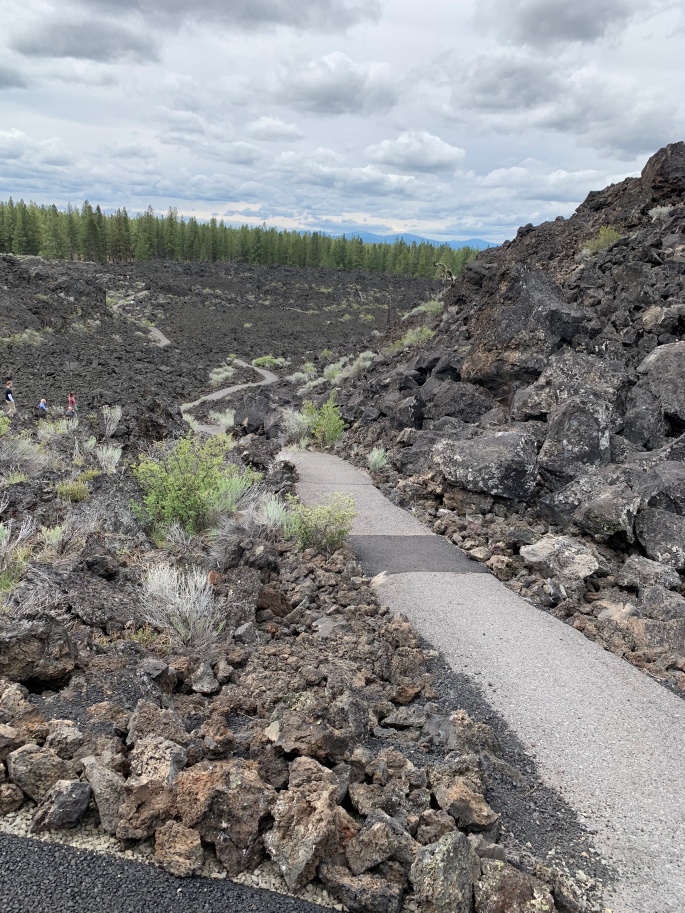 The kiddos earned their Jr. Ranger badges. Kudos to Newberry for their awesome wooden badges! 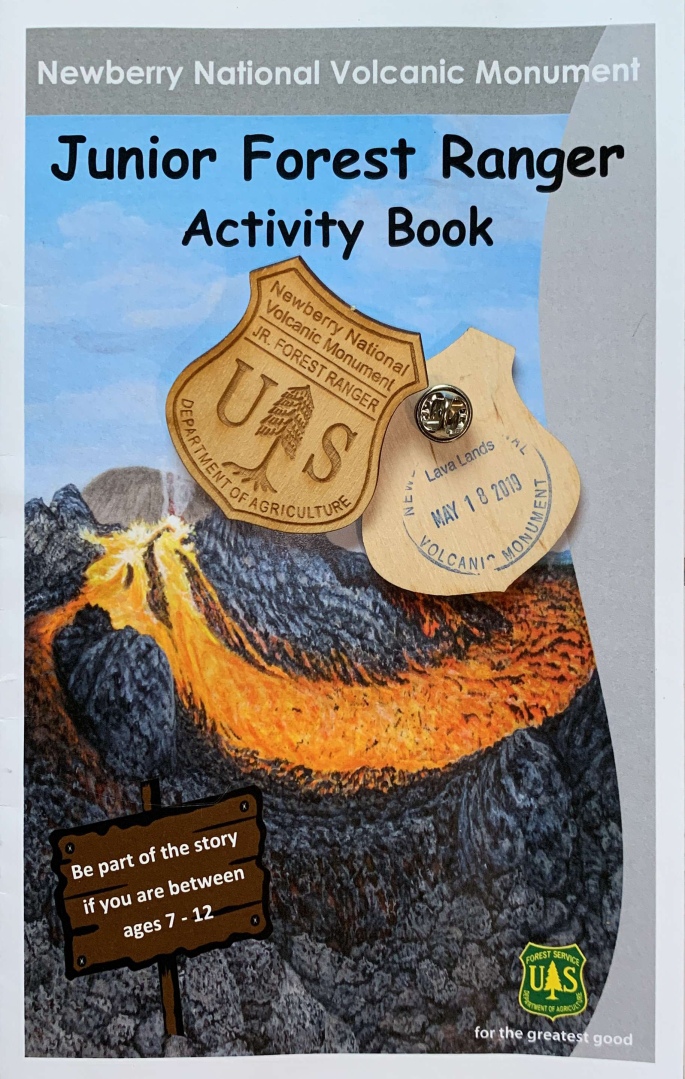 We had a great time learning about volcanoes at this National Monument!

In His hand are the depths of the earth, and the mountain peaks belong to Him.