After wandering around Temple Square on Tuesday afternoon (9/17/19), we headed to Great Salt Lake State Park which is about a 25-minute drive from downtown Salt Lake City.  Two different tour busses arrived while we were there, so a few of my photos have some tourists in them. I’m sure we are in some of their photos as well. 😂 I think they look rather nice silhouetted in the background.

Just between you and me, sometimes I watch the other tourists taking photos and then copy them. I like to borrow other people’s ideas about what would make a nice photograph. In my borrowed selfie idea below, you can see Antelope Island in the background.

Here is some interesting information from of an educational sign at an overlook:

Great Salt Lake is the largest lake west of the Mississippi River.  It is one of the saltiest bodies of water on Earth and more than four to eight times saltier than the ocean.

Why is the lake so salty? Three major rivers flow into Great Salt Lake. However, as a terminal lake, it has no outlet. Water escapes only by evaporation leaving natural salts and minerals behind.

Here is some information you wouldn’t know unless you’ve been there: 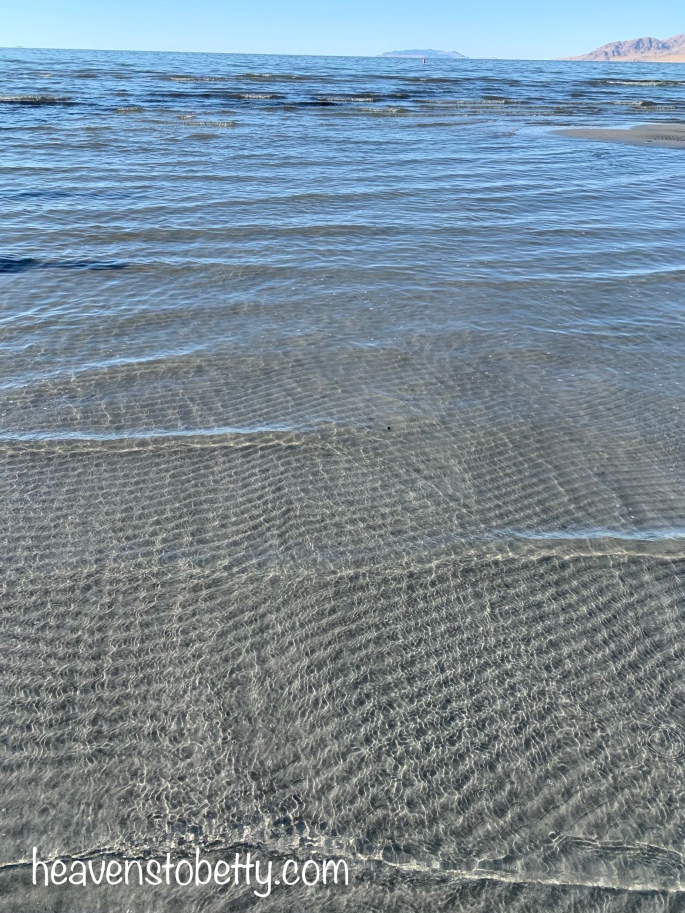 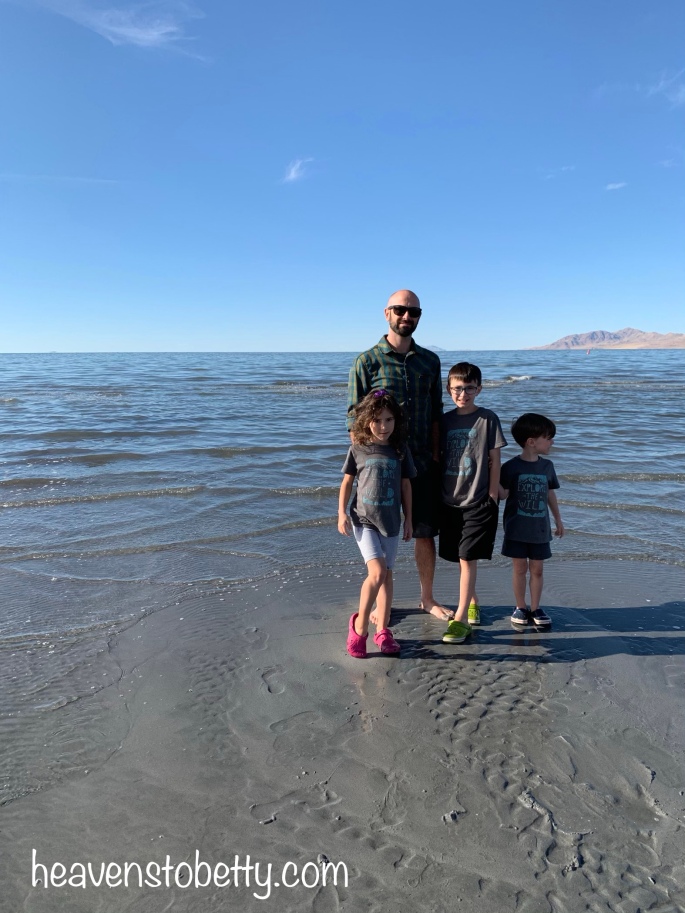 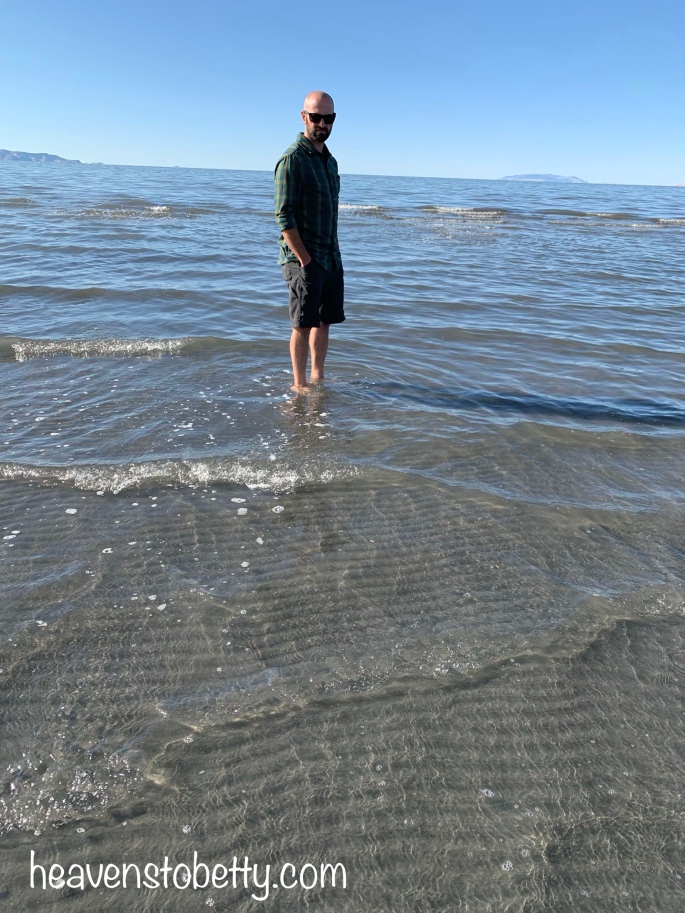 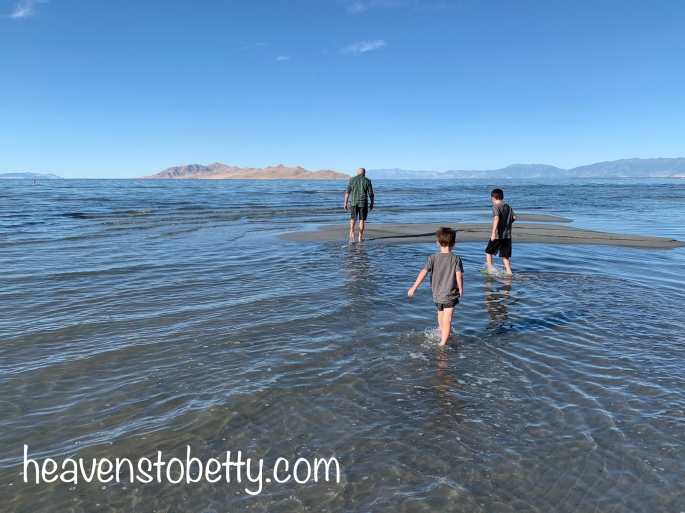 B (age 5) thought that these giant pieces of broken concrete were tectonic plates. S (age 9) liked jumping on the to simulate earthquakes.

There were lots of stacks of rocks and broken concrete that other people had made. E tried his hand at making some with the kiddos. You might remember in Arches National Park – Moab, Utah, that the park ranger taught us how to dismantle carins. These weren’t leading off any trails though, just semi-permanent sand castle substitutes. 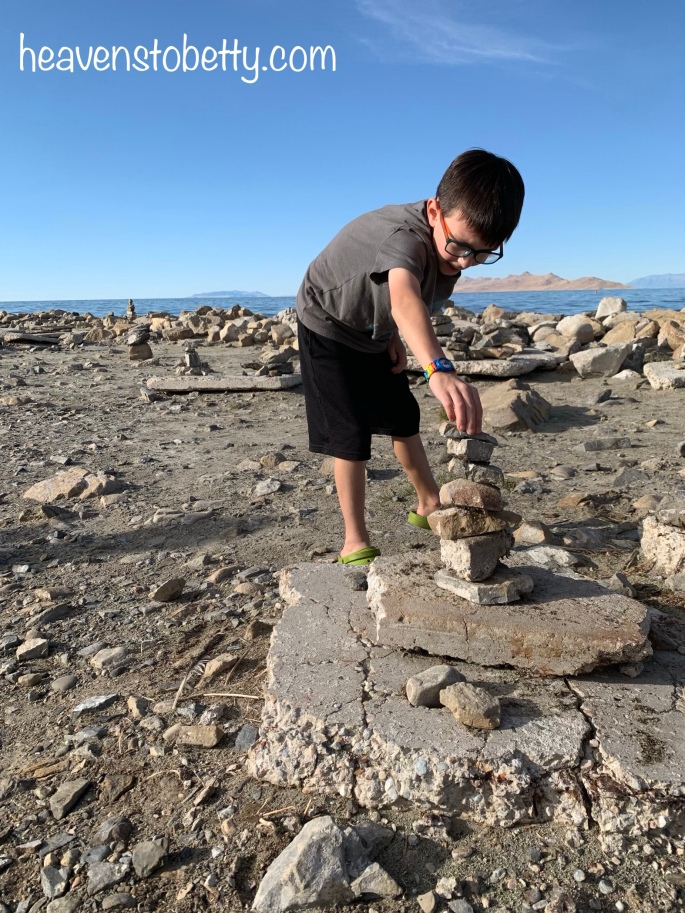 We had a really nice afternoon. We didn’t stay quite late enough to catch the sunset, but I really like how the sunlight reflects off the water in the photo below.

Our next adventure is a chocolate factory tour, and I can hardly wait for the free samples!