E took the gorgeous sunset photo. Aren’t those clouds just amazing! Winnemucca, NV is a stopping spot on the way to someplace else. Most RVers only stay here overnight. We are staying here for a week because E works Monday through Friday. We had different neighbors, on both sides of us, every night we stayed here.

Here are a few fun facts about Winnemucca, NV. The town was named after a Paiute Native American, Chief Winnemucca, which loosely translates to “one moccasin”. In 1886, Winnemucca became part of the Transcontinental Railroad. It is very possible, that Butch Cassidy and the Sundance Kid robbed the Winnemucca bank in 1900, though this is debated by historians.

The name, Winnemucca, reminds me of the name of a summer camp, so this week, we had “Camp Winnemucca”! I had stocked up on craft supplies from the Super-Walmart in Mountain Home, ID and amazon.com the week before we got here. We were all set for a fun-filled week of summer crafting. The kiddos even designed “Camp Winnemucca” Junior Ranger badges for themselves. I’m loving that they made them in the shape of Nevada. They’ve been looking forward to this stop for weeks! 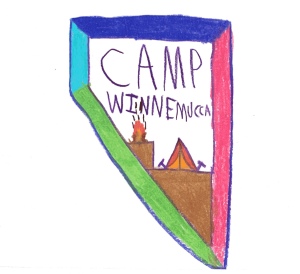 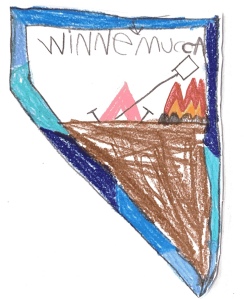 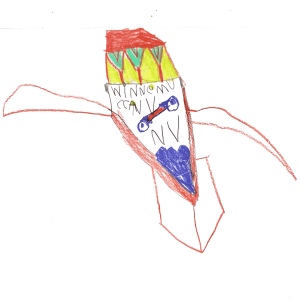 Sunday: We arrived at New Frontier RV Park. This RV park was similar to our last stop at Mountain Home RV Resort, Idaho. It was all paved with a few small trees. I had a terrible case of vertigo/motion sickness/dizziness after riding in the rig for 5+ hours. I kept getting up and down a lot on that drive. K threw up twice at the beginning and then there was a constant stream of “mom!” hollering for snacks, drinks, etc. I don’t usually get motion sickness. Ugh.

(Another sunset photo by E)

We saw a new, interesting insect and spent awhile researching what it was. It’s a sheildbacked katydid aka Mormon cricket. We saw a lot of them and they are big (8 cm long)! And by a “lot“, I mean way too many to count. I nicknamed them, giant-lobster-crickets. The nickname did not make me like them any better. Hmmm… what a wonderful opportunity for me to work on my dislike of insects — insert shudder & eye roll here. Did I say we were staying a whole week!?!

E managed to get out for 2 bike rides this week. The kids and I decided to be homebodies for a change of pace and didn’t do much exploring at this location. I don’t have many nature/outdoor photos. Instead, I’ll show you the crafts we made.

Monday: The day after we arrive in a new location is so hard on everyone. After 6 months of RV living. we still haven’t figured out how to beat the day-after-traveling blues. Blah. Ugh. Argh. After a horrendous explosion of negative emotions everyone seemed to settle down and feel better. I guess we’d been bottling our negative feelings for awhile! Yowzers. You know that feeling you get when you’ve been on vacation for awhile, and it’s been a great vacation, but you’re ready to go home? Now imagine that you can’t go home. That’s kinda how we all feel every time we move to a new location. Seeing all the fun stuff is great, and then sometimes we’re ready to go home… and we can’t, and it hurts, and it’s frustrating, and there’s nothing we can do about it. It’s super, super-hard to parent kiddos who are going through all those emotions when I’m trying (desperately) to manage my own emotions at the same time. We watched our theme song music video Confidence by Sanctus Real on YouTube and then the kiddos watched The Boxcar Children: Surprise Island DVD while I took a nice hot shower to reset.

We somehow managed to make it to the local library in time for crafts at 3:00. The kiddos had a blast painting sun-catchers. Crafts are so extra-awesome when mama doesn’t have to prep and clean up. Especially on a day like today! Of course, we also signed up for the summer reading program and bought a stack of hardcover picture books at 25 cents a piece (cheap retail therapy for mama)! If you read, Summer Reading Program at the Library, you know how I feel about books! 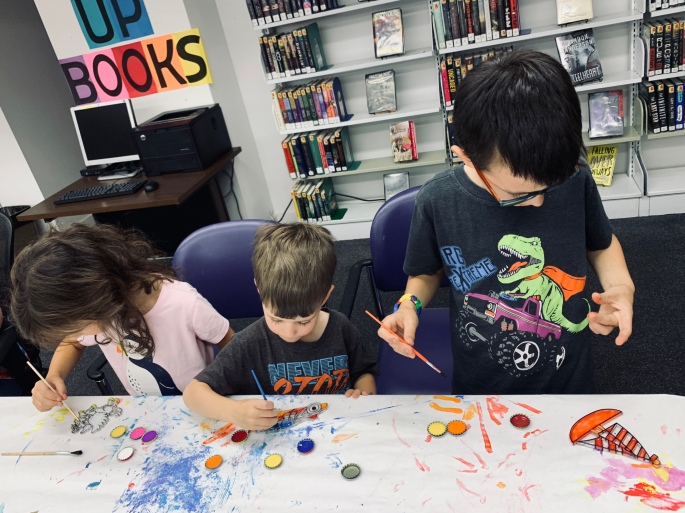 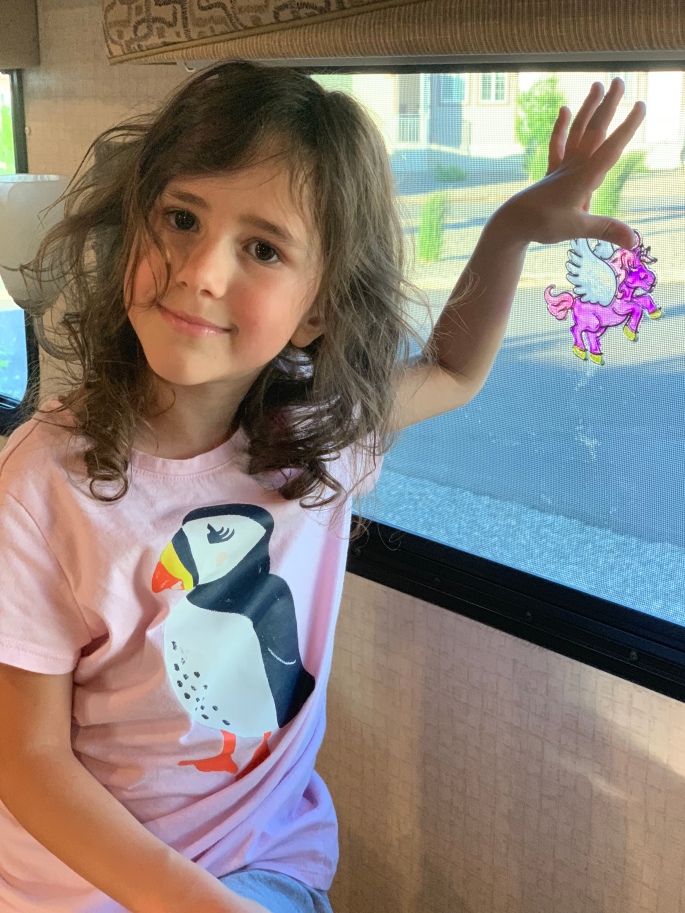 Here are two books about bad days. I just happened across the first one today, it was on the library’s “For Sale” shelf. It just seemed very appropriate for the day we were having. Plus, we are familiar with the illustrator’s work in Too Many Pumpkins by Linda White.

Tuesday: We painted the wooden cars my MIL sent to us several months ago. Thanks for the craft Grandma! We had so much fun painting the cars! The kiddos absolutely love painting projects!

E isn’t a huge fan of kids painting projects. Living in the RV, I’m inclined to agree with him. Painting is messy. This is only the 2nd painting project that We’ve attempted in the last 6 months. I snapped photos at the start of the project, then I left the table for 5 minutes and came back to this boy. Boy, oh boy! “I got paint on my shirt but it’s okay ‘cuz it’s blue and it matches my shirt.” Why did you take your arm out of the sleeve? “I don’t know.” lol

Wednesday: We made clothespin alligators to go with the song, “Hello Muddah, Hello Fadduh” by Allan Sherman. I showed the kids the music video on YouTube and they really enjoyed it. It is the quintessential camp song. I erroneously thought the song was called, “Camp Grenada”, luckily that google search worked well enough.

Click, Alligator Clothespins, for instructions on how to make them. I’m using them to hold bags of crackers closed. If anyone is keeping track, that’s painting project #3 in the RV.

Thursday: We made puppets from a fun kit I bought on amazon.com. This was a great learn-to-sew kit. The holes were pre-punched and the plastic “needles” had rounded tips. The kit included everything we needed to make 4 hand puppets.

Friday: We opted to head to our next destination today, instead of waiting until Sunday. We had about an hour delay unclogging one of the black water tanks. Yuck. If anyone is considering living in an RV, and is making a list of pros and cons, we suggest adding this to the “cons” list. After a hopeful prayer, we finally got some drainage happening. Hallelujah! We finally just hit the road, and we were reminded to do everything we can to prevent forest fires! 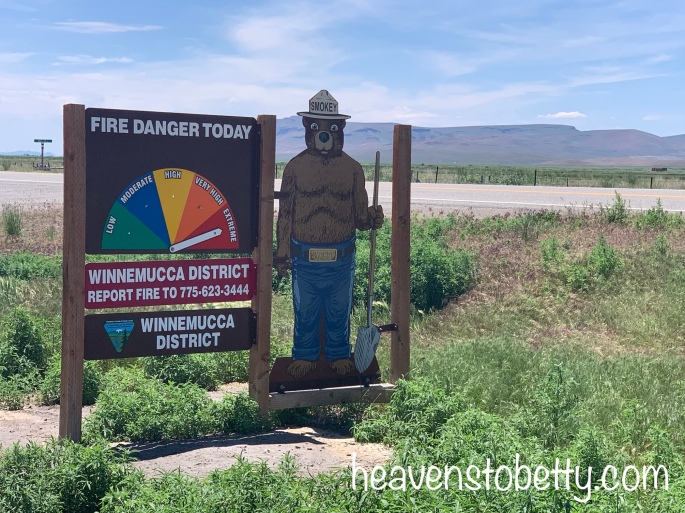 I hope this post inspires you to do some summer crafting or art projects with someone you love!

P.S. My last post, Going Grey with Glamor and Grace, didn’t upload properly on Wednesday. I think I fixed it yesterday. If you read it on Wednesday or Thursday, and it seemed to end abruptly with some funky formatting, please try again!